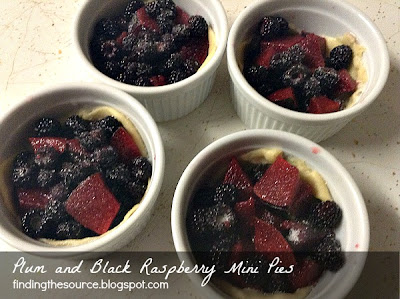 The black raspberries are back! The forest near our apartment is flooded with them, and they’re growing big and sweet from all the rain we’ve had this summer. Their harvest season hit just this week here in Michigan.

Yesterday I put on old jeans, grabbed a container, and headed into the woods to enjoy some “nature time.” My hands and arms now bear the marks of my excursion–they’re intricately scratched and stained from the thorny, tangled shoots and easily-popped fruit. But the taste of these juicy, flavor-packed berries make it entirely worth it. I intend to be in the woods every day for as long as the short season lasts.

You’re lucky if you can find these gems in stores; their fragility and brief growing season make them an impractical choice for producing and transporting in large quantities. You are better off foraging for them in the wild. Look for them along the edges of woods, as they like partial sun. They’re smaller than blackberries, and have a hollowed-out center like their red cousins. 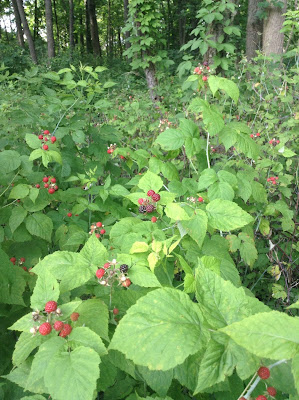 If you manage to get your hands on black raspberries, you will have the even more difficult task of deciding what to do with them. The variety is endless. By all means, keep it simple and enjoy them in a bowl of fresh cream. But you could also muddle them into honey-sweetened lemonade, toss them in salads, add them to muffins, sprinkle them on yogurt or oatmeal, mix them into ice cream, or stir them into pancake batter.

Or try this, like I did, and make Plum and Black Raspberry Mini Pies. As follows:

Make a batch of pie crust; divide dough into eight balls. Preheat the oven to 375. Roll out each ball in a small circle and line the bottoms of eight ramekins. Cut up two dark, sweet plums. Divide plum pieces and about one cup of black raspberries between the ramekins. Dot berries with butter; sprinkle with white sugar. Bake for 20-25 minutes, until the crusts are golden and the berries have begun to bubble.