Giving birth for the first time is magical, but it’s also unpredictable. The natural birth I wanted didn’t exactly happen! Here’s our “semi natural” hospital birth story (no epidural, but with a Pitocin induction!). 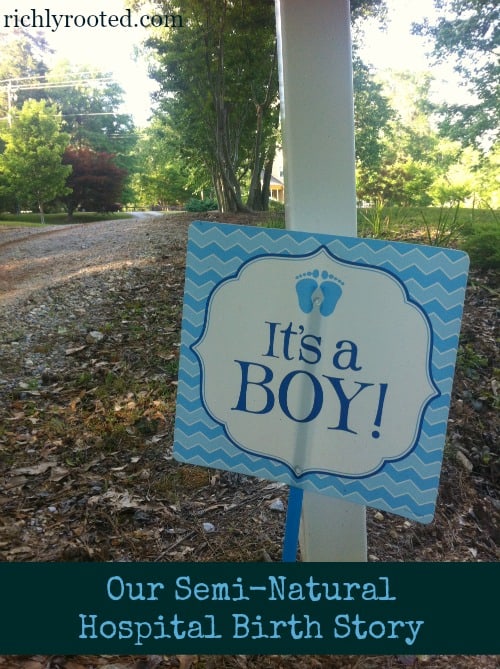 I cried when I learned that my baby boy would come into the world the very next day.

They weren’t just tears of joy.

I was nervous, stressed, a little scared.

Eric was on spring break from teaching, so he had taken me to my 39 week appointment. My doctor had us get another ultrasound to check the baby’s size. She looked at the results, compared them with previous measurements she’d taken, and gave us the news: baby boy’s abdomen was measuring weeks behind, which was a sign to her that my placenta wasn’t providing the necessary nourishment any more. She wanted to deliver him the next day, and we would need to check into the hospital that night!

I read that births don’t go as you expect, and sure enough, this isn’t what I expected. I hadn’t felt any “practice” contractions, and I thought he’d come late since he’s my first. And my To Do list was nowhere near finished, so he couldn’t come yet! But here I was, processing the news that I would be induced…and holding my son in my arms in a little more than 24 hours.

I was infinitely glad that Eric had gone to the doctor with me that day. We left the hospital pumped with adrenaline, formulating a plan for our remaining hours pre-baby, and sending a flurry of text messages to friends and family.

The remainder of the day sped by. We made the first part of it into a date–eating lunch out at a pizza restuarant, getting popsicles, and buying baby items that we still needed. In the afternoon we did chores. I prepared myself for labor by tanking up on food (since that wasn’t allowed for me at the hospital), and attempting to sleep.

We checked in to the hospital around 10:00. It was strange, not being in pain during that car ride. I had fully expected to be writhing with contractions on my way to the hospital, but instead I only felt tired.

They hooked me up to an IV right away, which in retrospect I’m not sure if it was necessary for me to be on one during the night, since they weren’t starting the induction until the next morning. I later learned that the nurse hadn’t gotten a chance to read my birth plan, yet, which said that I wanted to avoid the IV. Oh, well.

After doing a bunch of paperwork, they gave me some Cytotec to get things opened up, and then left us for the night. It was my first night in a hospital, and one of the most uncomfortable nights I’ve ever had. The IV cords sticking into my wrist were no picnic, and I had two scratchy elastic bands around my belly–one to monitor my contractions, and one to monitor baby’s heart rate. I was desperately tired, but couldn’t sleep. I was also beginning to feel light contractions.

“This is probably going to be one of the worst parts of being in labor.” I thought to myself multiple times that night. In retrospect, I was absolutely right. As a person who values being comfortable, I learned that I would rather have a short period of intense pain than elongated hours of nagging discomfort. Thankfully, Eric slept soundly that night on the couch–he needed his rest for the non-stop support he would give me the next day!

My doctor and the new nurses on duty arrived around 6:00 a.m. to check on me and break my water. I was progressing slowly, so they went ahead and started me on a low dose of Pitocin. My mom arrived soon afterward. 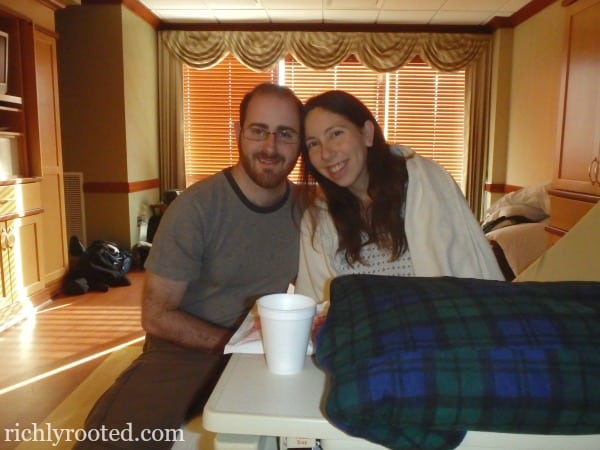 For me, April 2nd was a sleepy, just-get-through it sort of day. I was battling exhuastion as much as pain. I knew it was going to be a long day, but if I could just stick it out I’d get the best reward of my life.

For the first few hours, I talked with Mom and Eric a bit, moving around the room and trying different positions that my two nurses (who were great!) reccomended. I was in each position for an hour or two. At the time, I wouldn’t want to try anything new, but each time I switched positions it felt good. The only awful position was flat on my back in the bed, which I had to get into whenever they checked to see how dilated I was.

I seemed to be progressing very slowly, and the nurses gradually upped my dosage of Pitocin. A few hours in things got noticeably more painful, and I had to really concentrate on breathing deeply during each contraction. At that point I was glad for the monitors. The contraction monitor let me see how long, intense, and close together each contraction was, which gave me a sense of accomplishment. I knew that each contraction was getting me closer to The End. 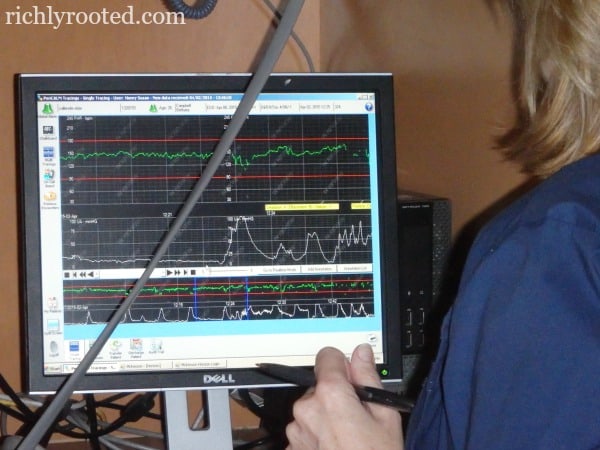 I’ve heard that back labor is a real pain in the back, but thankfully, I didn’t have any! At one point when I was kneeling on the bed with my head hanging over the headrest, Eric pulled out the reccomended tennis balls and tried to massage me. I think I was pretty nice during labor, but at that point I did snap at him and told him “Ow! That hurts! Put those things away!!”

It was amazing to have him there, though. I would call to him when I felt a contraction coming on, and he’d hold my hand and encourage me. I ended up not letting him leave the room, although that hadn’t been my intention. My mom did go to get lunch at one point. The stuff she brought back smelled very strong, but I can’t even remember now what it was! I wasn’t allowed to eat anything, or even drink, actually. Thankfully, my awesome doctor let me drink water and Vitamin Water instead of just the prescribed ice chips, and that was a blessing. I’m one of those weirdos who don’t do well sans nourishment. 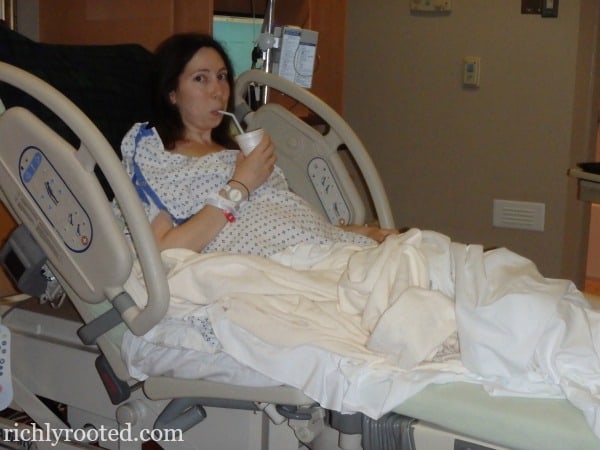 As the day and I progressed, contractions got more painful, and I needed more active help from Mom, Eric, and the nurses to focus my breathing during each wave. I was on the birthing ball, Eric and Mom supporting me on each side, and by this point I was so exhausted that I would fall asleep between each contraction! I would wake up when I felt a new one coming on, and interupt Mom and Eric’s conversation to tell them “One’s coming!”

Because I was getting so exhuasted, I was discouraged to hear that I was only 4 or 5 centimeters (I don’t remember exactly, but it wasn’t an exciting number). Mom said she thought I’d have the baby by 4:3o or 5:00, though. I was incredulous, but hoped she was right.

She was. After a couple hours on the birthing ball, I moved back onto the bed with a “birthing peanut” (like a birthing ball, but in the shape of a peanut). I’d entered the hardest part of labor: when I could feel baby very low, but had to hold him back during contractions! I wasn’t dilated enough yet, and it would be dangerous for him to come out. It was extremely difficult to keep my breathing regulated when contractions hit. With each one I had a gasping reflex and wanted to pull in air sharply without letting it out, but the nurses wanted me to puff out in short breaths.

Just when I thought I couldn’t hold him back anymore, things got very exciting and the pace picked up tremendously. Oh, and I was now fully awake! No more nodding off! My doctor came in, calm and collected like she always was, as well as several other nurses I hadn’t met before. I was attempting to hold him back during a few more contractions, saying things like “I wanna push!” and “I can’t hold him back much longer!” and “I feel like he’s right there!” between each one.

About fifty things were happening at once in that room as everyone got ready, but the ones that I took note of were that 1.) they turned on the bright lights above the bed, 2.) my legs were up in leg rests now, and 3.) I was being given some quick instructions on what to do next. Thankfully, they weren’t complicated. Basically, I just had to bear downwards and push!

And I did. I don’t know how many more contractions it took before Eric told me he could see baby boy’s head, but it wasn’t many. He was out in a matter of minutes. Although it was the most painful, the pushing was my favourite part of the labor and delivery. I was concentrating very hard, completely focused and active, yet also completely on autopilot.

Several sets of hands passed that writhing, skinny, greyish little baby up to my chest at 5:08 p.m. The force of focus that I’d exerted on pushing him out swung completely to taking him in–looking intently at this little person, kissing him, soothing him, and feeling his body squirming and settling against mine. 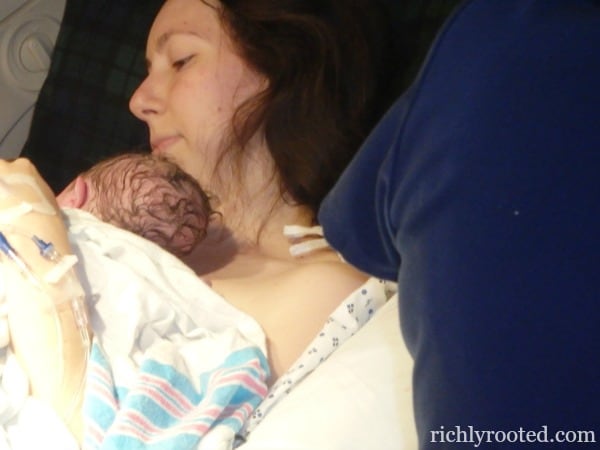 Everyone in the room did their jobs–my doctor delivered the placenta and gave me some stitches, the nurses cleaned things up and helped me to try nursing him a little, Mom smiled big and took pictures, and Eric bent over baby and I said things I don’t remember, but completely agreed with.

Baby boy stayed on my chest for a couple of hours, I think, looking around with his big blueberry eyes and moving his head to follow Eric’s voice. My nurse helped me with breastfeeding for a while, and once the room was put back together they brought baby boy over to a little station where they weighed and measured him while Eric looked on.

I was very eager to get the IV out, and I made several comments to that affect. I also desperately wanted a shower, but the nurses didn’t want me to take one yet in case I was shaky (which I was!). Eventually I got the wretched IV off, was assisted to the bathroom, and got to brush my hair. I was ravenous and feeling very eager for the pizza Eric had promised me. Several of my family members were in route to visit us, and they picked up our pizza on the way. When they arrived, I dug in while they took turns holding him.

By the time everyone was gone, I couldn’t wait to sleep. We were glad to postpone baby’s bath until the next morning. Sleep was more important at that moment, and I enjoyed a few delicious hours before awakening to baby cries and the life-changing, life-giving reality of full-time parenting.

Are you expecting your own little one? You can get free week-by-week pregnancy updates HERE–and they’re from a natural perspective! You may also want to check out Mama Natural’s #1 bestselling online childbirth class. You can watch the lessons at your own pace, in the comfort of your own home–and it’s cheaper than most in-person birth courses! Get details HERE.

P.S. Before this, I wrote a letter to my baby boy when he was in the womb. You can read it here.