All my life I thought I wanted more, but what I really needed was the sweet, simple life of Green Gables. Here’s how I’ve chosen to go against cultural norms, stop climbing the ladder, and choose contentment. 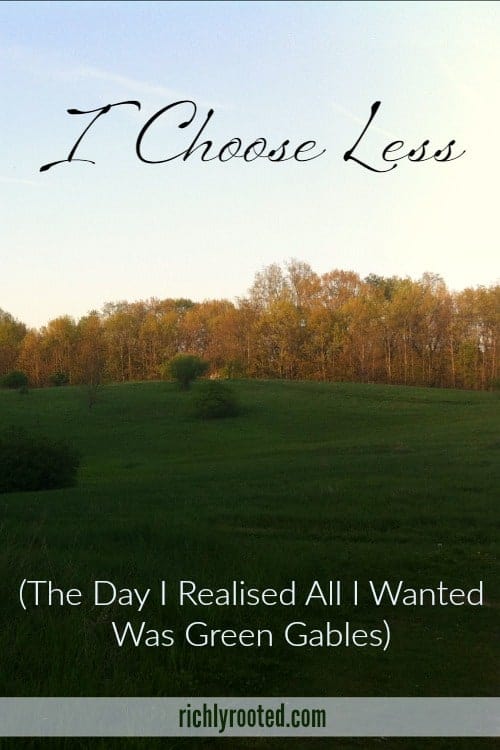 Should I dream big, or settle for less?

I turned the question around in my mind, over and over again. The answer seems painfully obvious in our 21st-century, you-can-do-anything society.

Or…err…dream big, you special snowflake, you!

We’ve been told from childhood that we can do and be anything and everything we want. We’re encouraged this way because the world really does need innovators and inventors.

And hundreds of people have shown me that it’s possible to make big dreams, to achieve them, and to look awesome while doing it.

So I got a little dazzled.

I got swept up in the possibility of being Successful. I looked at what others were doing–acquaintances from my alma mater; up-and-coming entrepreneurs with trendy startups; and occasionally even the urban apartment-dwelling, high-powered, good-looking young professionals who populate the movies. I thought: I, too, could do all that. Because I, too, am a hard worker with good ideas who lives in a First World country.

I have Anne Shirley’s ambition and Diana Barry’s love of finer things, which together make a perfect storm for me: I need achievements and money to feel successful.

But not, as it turns out, to feel happy.

I’m not saying that I’ve had a taste of glorious acclaim and wealth and that they’ve left me disillusioned–because I haven’t tasted either. Rather, I think I’ve realised in the nick of time that those things won’t automatically bring fulfillment.

A few months ago I was skimming the bios of a speaker lineup for a high-profile online summit. All of the bios had a crisp, professional headshot and the text went something like this: Mr. Incredible is a best-selling author and a leader in the online world who grew his platform from 50 to 500,000 in 6 months. He continues to inspire thousands of people around the globe with his dynamic speaking tours, and has raised 5 million dollars for charity while building his Fortune 500 company and being a dad to his 2.5 children. In 2015, he was awarded a Gold Star and named “Young Entrepreneur of the Millennium.” He enjoys Scotch, training St. Bernard dogs, and relaxing in his home on Lake Tahoe.

As I read bio after bio that sounded exactly like this (with slightly different details), my eyes started to glaze over. But I knew how they all got there, more or less. They worked extremely hard. They worked overtime, then worked some more. They never stopped learning. They built connections with well-known gurus in their field. They always charged high, because someone was willing to pay what they asked. When the money started coming in, they reinvested it to build their team, level up their technology, create new products, re-brand and climb ahead to new heights. 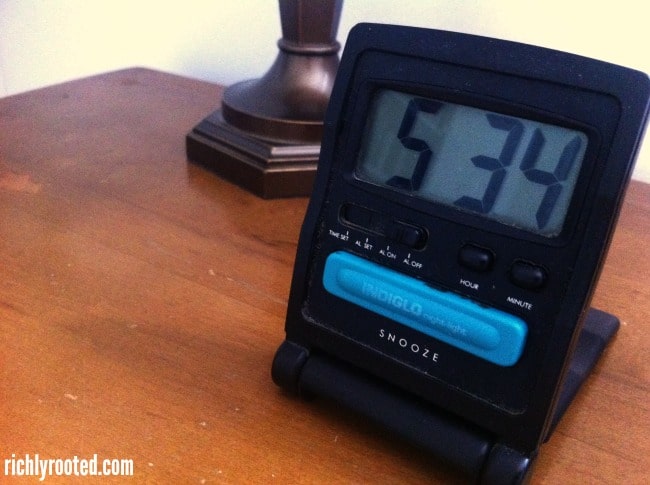 It actually sounded doable to me. But it also sounded costly. Not in terms of capital (although there would be that), but in investment of time, energy, emotions, and priorities.

Was Success worth it?

I weighed the cost for months. I talked with Eric about it. “I think I could make real money for us,” I said. “I know I have it in me, and wouldn’t it be wrong to squander my God-given talents?”

I kept working hard on my blog (which would be the vehicle–or at least the gas pedal–for achieving my dreams), while still giving my home, family, and my other side business the attention they needed.

I listened to webinars and signed up for free courses on How to Be Successful (as a writer, as an influencer, as a business mom…the list goes on). While I tuned in to the gurus I also listened to my friends.

The gurus told me I could do and have it all, but my friends told me to be cautious. My blogging friends who are further along the path towards Success confirmed that there is a dark underbelly to this journey. That it’s all too easy to become a workaholic. To get burned out emotionally, spiritually, physically. That everything you say “yes” to means saying “no” to something else–and that sometimes, your family gets more “nos” than anything. 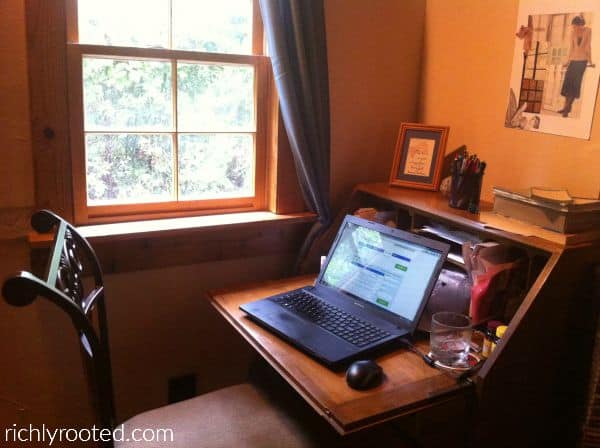 After months of thinking–in the shower, on the lawn while I watched my baby play, in moments of abstraction while I did the dishes–I finally found clarity by speaking one thought aloud:

“All I really want is Green Gables.”

Mom and I were taking a walk down the gravel road that borders our lake, and Little Dude was strapped in the Boba at my chest.

I talked about how Matthew and Marilla worked hard–they certainly weren’t lazy or uninteresting people! They were rooted in their little community, and they created a flourishing, beautiful haven at Green Gables that Anne treasured despite all of her high ambitions, lofty ideals, and glimpses of the fancy world beyond Prince Edward Island. 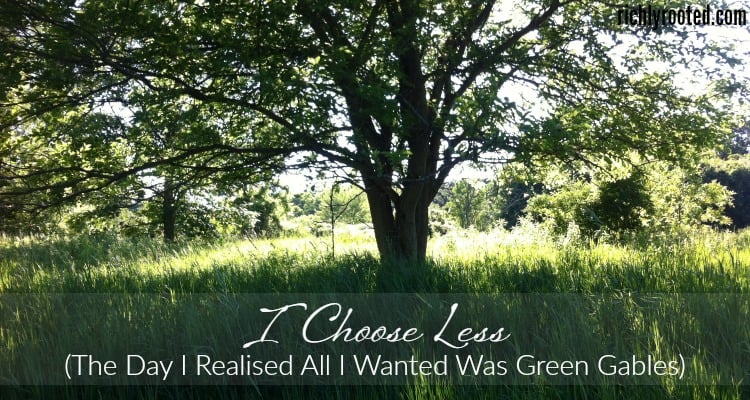 In the sweet, simple pleasures of everyday life as a homemaker and mom, I’ve often felt that I already have my own Green Gables story. It certainly felt like it as I walked that afternoon with Little Dude hugged close.

There will be many more years of hard work as Eric and I build our home together and raise our family. There will be things to dream about together and plan for and wait for. We don’t even have a house of our own, yet.

We’re ambitious for a joyful, cozy home where our family feels safe and happy to be alive. Where we can cherish life’s simple abundance and learn the secret to being content because we know the source of all our blessings is God.

It’s a different kind of ambition than I thought I’d chase, but now I’m remembering that it’s what I always wanted. 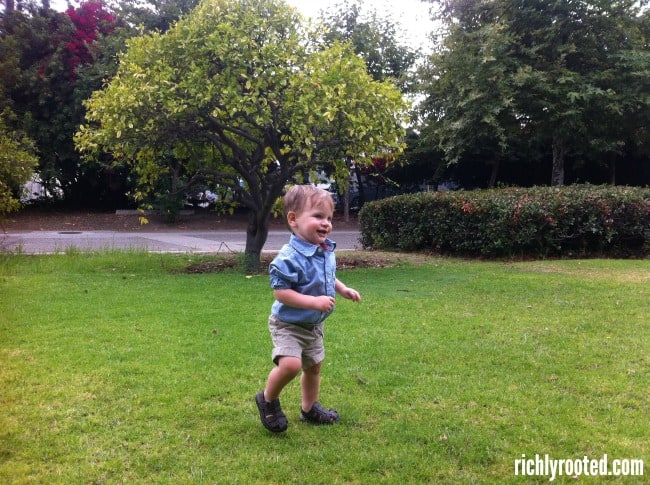 No, we won’t have enough money to do all the things on our bucket lists, to go on all the trips we want to take, eat the trendy foods, or lavish our children with every meaningful experience we want to give them. I will probably never be a well-known name or keep a nation spellbound with my words.

Instead of climbing high I’m choosing to go deep, to put down roots where I’m planted and help my small corner of the world to flourish. I’m at home with Simple, and settling there doesn’t feel like giving up my dreams…it feels like waking up to the beautiful life I already have. 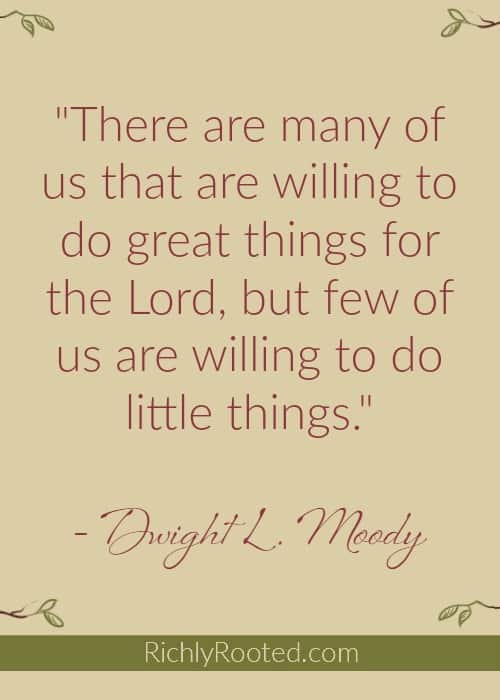 Update 2/29/2020: Four years later, we’re continuing our “root work” with our simple life in the suburbs. You can read about it here.