Plan a cozy family game night as an alternative to movie night! You probably haven’t heard of all of these unique board games, but you’ll soon be hooked! From tile games to fast-paced card games to cooperative strategy games, there’s something here for every gamer. 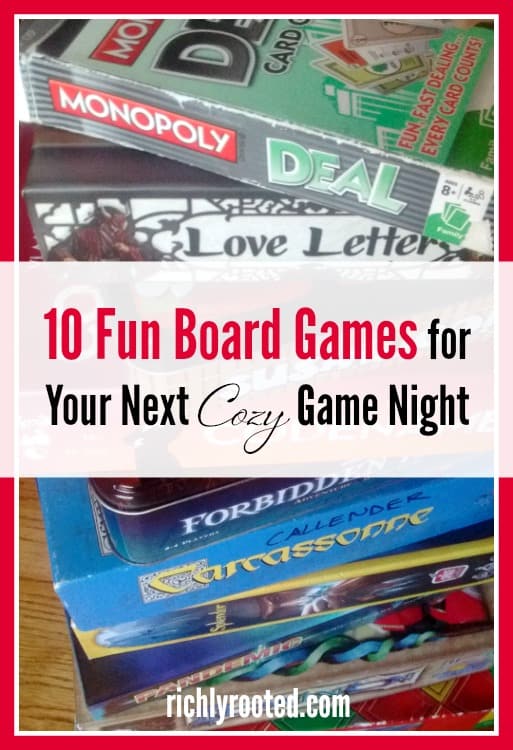 10 Board Games You Haven’t Played Yet

I bet you’re like me and have oodles of memories of playing board games and card games as a child. Some of those memories are prickly (attitudes and emotions emerge with competition, right?), but likely most of your board game memories are steeped in fun and nostalgia. It’s a safe bet that we have these similar memories because back in the day, we didn’t have so much technology vying for our attention. Playing a board game was an easy solution to being bored. We didn’t have the option of flopping down on the couch with our phones!

When I wrote my post on Recovering the Lost Art of Analog Living, I mentioned playing board games as a simple way to recapture a non-digital lifestyle. Happily, board games have made a huge comeback recently, thanks in large part to my own Millennial generation.

Buying a game is a bit of an upfront investment, but the payoff is big. For each game we’ve added to our “game library,” we’ve taken time to research it and read reviews to make sure it’ll be in our rotation for decades to come. We love sharing game nights with siblings and friends; add a game night snack and it’s the perfect setup for a cozy night at home! (And a great alternative to endless T.V. watching.)

What follows is a list of some of our favourite games that are perhaps less familiar to the casual gamer. I sill love playing classics like Clue and Monopoly, but these newer games have delightfully expanded our horizons and challenged us in new ways.

P.S. Not all of these are technically “board games.” Most actually involve cards or tiles. So technically they’re in the broader class of tabletop games. However, with language and Google being what they are, I’m just going to call them board games and figure we understand each other(:

10 Unique Board Games for Your Next Family Game Night

What We Love About It: The immersive quality and flavor, the collaborative aspect

In Pandemic, it’s the players against the game! You’re a team of scientists working together to stop four deadly diseases and save humanity. The game board is a world map marked with major cities. You’ll travel between cities to stop disease outbreaks and find cures. This game always gives me a rush to play. You feel like you’re really there, and things get intense quickly as you race to find disease cures before it’s too late. It’s a hard game to beat, but so addictive!

What We Love About It: The scalability (can be played collaboratively with just two players or competitively with large groups)

If you’re bored of Apples to Apples (aren’t we all, a little?), Codenames will be your new go-to party game. Two teams of Secret Agents are faced with a grid of word tiles. A delegate from each team plays the role of Spymaster, giving their teammates clues to help them identify their team’s tiles. If you’re not careful, you could trigger the other team’s agent — or even activate the assassin!

What We Love About It: Quick game play, high replay value, fast-paced

Check It Out: Original game | Party edition (includes scoring sheet, markers, and more cards so you can play with up to 8 people)

I was hesitant to buy this game because I thought it sounded silly. Thankfully, I deferred to my husband who had read the excellent reviews and knew it would be a winner! In Sushi Go, the cards are divided up among players. You pick one, then pass your hand to the left and choose a new card from your new hand. The goal is to rack up as many points as possible, but you have to take some risks to do it. Most people we introduce this game to are skeptical at first, but universally end up loving it and wanting to play again and again!

What We Love About It: The way the map takes a different shape each time you play

Carcassonne is a tile-laying game in the “Eurogame” genre (like Settlers of Catan). Players lay tiles to expand the Medieval county of Carcassonne. As you build the map, you can also place “followers” to claim roads, farms, cities, and monasteries, which will count towards your point score at the end of the game.

What We Love About It: Portability, elegant game play, high replay value, quick set up

Check It Out: Original game | Samurai-themed version (this is the one we actually own)

For a game deck with only 16 cards, it’s amazing how much strategy Love Letter offers. It’s a simple and elegant balance of luck, deduction, and risk, and not a game you’ll soon tire of. The goal is to knock other players out of the round by playing one of two cards in your hand. At the end of the round, the last player standing gains a token. The first player to acquire a certain number of tokens wins.

Note: We recommend using card sleeves for this game to protect the cards. If a card gets bent/marked, other players will know what it is and that can skew the gameplay.

What We Love About It: Beautiful card art, high replay value

Check It Out: Original game | There are a TON of expansions, but Seaside and Prosperity currently have the most reviews on Amazon!

Dominion is a Medieval themed deck-building game where players accrue Victory Points to win. Each player begins the game with only 10 cards, but you use your deck to purchase other cards from a large library of options. As your deck grows, you have more and more options for gameplay. Some cards let you tamper with other players’ decks, others let you draw extra cards or exchange low-value cards for high. There are lots of different combinations of cards you can use, so this game definitely has good replay value, even without the many expansions.

What We Love About It: Portability, fun to play with “non gamers”

Check out Monopoly Deal for a twist on a classic! It’s a card-based game that’s much quicker to play than the original, but still based on amassing real estate and cash. Players use Action Cards to charge other players rent, steal property cards, make deals, “pass Go,” or force other players to give them birthday money.

What We Love About It: The immersive quality and flavor, the collaborative aspect, the artwork

You and your friends are treasure-seekers on a mysterious island. Each player has a different ability that will benefit the team as you try to collect the four elemental treasures. But there’s a major problem: the island is sinking beneath your feet! Get the treasures and get to your helicopter before the island disappears into the depths of the sea, taking you to a watery grave.

What We Love About It: The spatial/visual aspect gives you a different kind of mental exercise than other games

Blokus is a spatial and tactical game that’s extremely simple to learn, yet has a high replay value. There’s no reading or text involved, so younger children can play without needing an adult. Players take turns placing their color-coded game pieces on the board. As the board begins to fill up, you can use your pieces to block other players. But you have to be strategic — every piece has a different shape, and if you’re not careful you’ll run out of space to fit them all in! The player with the least number of squares left at the end of the game wins.

What We Love About It: Beautiful card art

This Renaissance-themed game requires players to buy and trade cards and tokens to rack up the most Prestige Points at the end of the game. Splendor has an economic aspect to it; the choices you make early on in the game will effect later outcomes. Each turn, you have to adjust your plans slightly based on previous players’ actions. This keeps you on your toes and prevents the strategy from getting stale.

Bonus games for people who are really into games:

There are a few other games we enjoy but I didn’t include on this list because they are more complicated! These games are awesome, but they take longer to set up and have a higher learning curve. (And some take awhile to play.) However, if you’re not afraid of more moving parts and more rules, give these a try:

Scythe: As someone who usually tries to ferret out the winning strategy and then stick with it, game after game, I LOVE that there is no one “best” strategy for winning Scythe. There are truly many ways to approach this intricate yet elegant game. I still win a lot, but not so much that other people won’t want to play with me (*cough, Dominion, cough*). This game is also a bit unique because you can play it solo as well as with friends.

Aeon’s End: This is another cooperative game. Play solo or with friends to try to beat the monsters. It’s hard to win, but very satisfying when you do!

7 Wonders Duel: A two-player version of the popular original, I feel like this one requires more complex strategy.

Twilight Imperium: An epic “space opera” board game that takes 8-9+ hours to play. Yes, you read that right. Eight to nine+ hours. And that’s if you already know the rules! 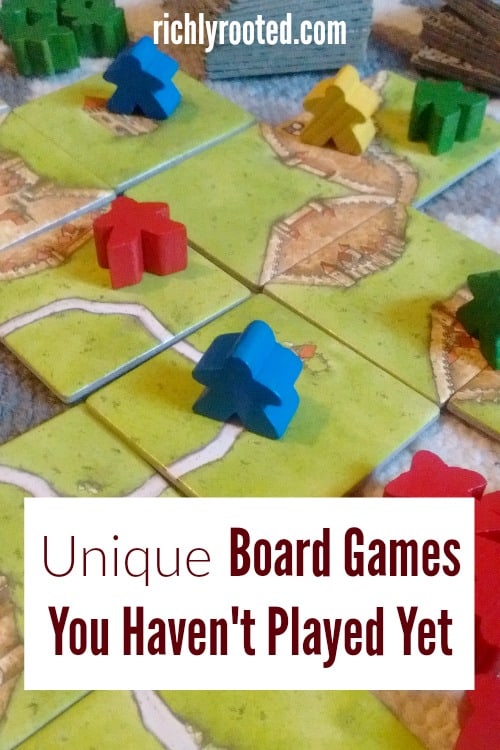