Although we thought we were pretty healthy eaters before, we’ve made some big changes to our diet in the last couple of years! This is our family’s story of switching to a plant-based diet.

Did you know that processed lunchmeat can cause cancer…even when the lunchmeat has “no nitrates added”?

I didn’t know that until my husband sent me an article to read and got me investigating.

I looked at the article and thought: How annoying.

How inconvenient to discover that a staple of your weekly lunches isn’t doing you any favors! And we thought we’d been doing it the healthy way by getting the lunchmeat packages that said “no added nitrates or nitrites!”

I have a principle that if there’s any food item that’s part of our regular routine, it needs to be a healthy one. Otherwise it should be moved to the less frequent “treats” category. Since lunch meat no longer seemed a good option for our weekly grocery list, I decided I’d just have to get creative and find some healthier lunch options instead.

Little did I know, but lunchmeat was just the beginning of the dietary changes we’d make over the next few years…

Before I continue this exciting story, let me pause for a minute to address the question that may be uppermost in your mind right now: Why should I care what Elsie’s family eats or doesn’t eat?

Ah, you see, the answer goes back to my philosophy of what makes an old-fashioned blog (like this one) special. A blog is a journey. I started this one back in 2011, and in the early years it was mostly centered around health and food. Readers who have been on this journey with me since early days may be curious to see what’s changed for us and what hasn’t. (I know for my part, when there’s a blogger I read and follow, I’m always interested to see where their journey takes them!)

Second reason to share this dietary update is that I want to encourage others to make healthy changes in their food consumption, too. Reevaluate what you’re doing every now and then. Are there any not-so-great eating habits that you’ve grown too comfortable with?

Now, back to our food story…

In a nutshell, we’ve been eating a whole foods plant-based diet since 2019.

Shortly after that lunchmeat epiphany, I watched a documentary on Netflix called What the Health, about a man who becomes vegan after investigating the health concerns and global impact of an animal-saturated food market.

I wasn’t super impressed by the documentary or the filmmakers’ tactics, but it did make me want to know more.

Next, I turned to the better-quality Forks Over Knives documentary, which introduced me to a whole foods plant-based diet (WFPB). This documentary follows the life-long research of doctors Caldwell Esselstyn and T. Colin Campbell, whose separate careers led them to the same conclusion: eat a plant-based diet for optimal health.

What is a Plant-Based Diet?

A plant-based diet heavily de-emphasizes meat in favor of vegetables, fruits, whole grains, and legumes. In a plant-based diet, the majority of your macronutrients—protein, carbohydrates, and fat—come from plants. A plant-based diet might not entirely rule out animal products (this depends on the individual), but it operates on the premise that plants are the powerhouses of your diet.

After watching the documentaries, I started reading books and scientific journal articles, and listening to podcasts and interviews from the doctors featured in the films. While I did not feel a vegan diet would be sustainable for us, I’ve become convinced that animal products create a burden for our bodies that we need to address sooner rather than later. I’ve had the bad habit of assuming that I’ll ramp up my healthy eating game when I’m older…or worse, when I actually have a disease! Which is a very glib way of thinking about health, isn’t it?

We chose to adopt a plant-based diet primarily for health reasons, as there is an overwhelming, growing body of evidence that plant-based diets protect from our major diseases like cancer, heart disease, and diabetes. However, there are also environmental and social concerns with eating an animal-centric diet, so for many people, a plant-based diet is an ethical decision as well.

What’s the difference between vegan, vegetarian, and plant-based?

Vegan, vegetarian, and plant-based diets can be similar, but there are distinctions. Here’s how they break down:

One of the things that plant-based advocates like to remind people of is that vegan and vegetarian diets don’t necessarily mean you’re eating lots of plants or being healthy (e.g. Oreos are vegan). The whole foods plant-based diet always keeps plants center stage and doesn’t rely on processed food as a meal solution.

If you know me through this blog, you know that I avoid extremes, preferring a more moderate and flexible approach (I cut back on sugar but still defend its real estate in my pantry). Going plant-based made sense for me because it puts our focus and energies into eating LOTS of vegetables and fruits, but still “allows” for the things we enjoy like Chick-fil-A and crème brûlée.

You’ll find a bit of a range when it comes to the finer points of a plant-based diet. On the strictest end of the spectrum, Caldwell and Ann Esselstyn eat a plant-based diet with no animal products, ever, as well as no oil, limited salt, and no saturated fat from plants such as avocados and coconut milk. On the other end, for some plant-based advocates all edible plants are fair game, and they take their cues from long-lived people groups where meat and seafood are consumed in moderation. We’re in that camp, although I know we still have room for improvement with eating more plants than we do currently! 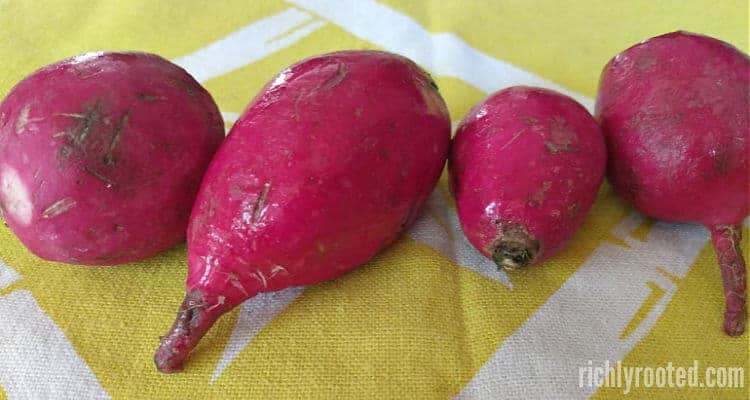 How We Went Plant-Based

After all of my research on the subject, it was time to implement what I learned. I had two simple aims: increase the plants, reduce the meat.

Of course, we ate fruits and vegetables before. But it wasn’t enough. I had fallen into the trap of becoming a “token vegetable” cook, including a vegetable with our meals as an afterthought, merely to check a box. With our new emphasis on plants, we started buying fruits and vegetables we’d previously ignored, and sought out new-to-us ways to prepare them.

We discovered that roasted broccoli is so amazing that we could easily eat a whole pan—each! And who knew that cauliflower is so wonderfully versatile? You can use it steamed and pulsed as a rice-like side dish; or bread it, bake it, and add to tacos!

We upped our green smoothie intake to about four times per week, so we can all start the day with a dose of spinach or kale. (We don’t add juice to our smoothies…our typical method is to put water in our Blendtec blender with a few handfuls of fresh or frozen kale or spinach, plus a couple handfuls of frozen fruit. Aldi sells bags of frozen berries, mangoes, pineapple, cherries, etc, so we vary these from week to week.)

Our go-to weekday breakfast is overnight oatmeal (variations of this). And even when we enjoy egg-and-cheese burritos (usually on the weekend) we load them up now with mushrooms and cilantro or other plants.

For supper we eat dal, beans and rice, all manner of soups, chickpea curry, and tofu, to name a few things! Lunches are usually leftovers for the adults, and finger foods for the kids like peanut butter sandwiches, raw fruits and veggies, frozen peas and corn, crackers, etc.

In an upcoming post, I’ll share some of the family-favorite, plant-based recipes we’ve added to our repertoire. We’ve always been advocates of cooking from scratch, it’s just that the recipes we make now have become increasingly plant-dense!

Because we lived under a tight budget for years, we’ve never been meat-at-every-meal people. We usually had one or two vegetarian suppers per week, and plenty of meat-free breakfasts and lunches. However, unless we were eating beans we typically relied on eggs and dairy (cheese, sour cream, cream cheese, etc.) to maintain the protein in lieu of meat.

Now we’ve flipped the equation so that we only have one or two meat suppers per week, perhaps one vegetarian (for homemade cheese and veggie pizza, for instance), and the rest plant-based/vegan.

Across the board, we’ve reduced our dairy consumption to less than half of what it used to be. We use unsweetened almond milk instead of cow’s milk, and since we’re not having those lunchmeat sandwiches anymore, we don’t use as much cheese, either! (It’s interesting: I’ve found that in a lot of meals and recipes, animal products call for more animal products. So if you intentionally cut back on one type of animal product, you end up reducing others along the way without much effort.)

In spite of the fact that we ate a real food diet before, going plant-based was still a radical mindset and habit shift for us. But it’s been fun. And incredibly tasty. Who knew that by giving up lunchmeat we’d gain so much?

Stay Tuned for More Posts in This Miniseries…

I’ve got a bit more to say on this topic, so keep an eye out for these upcoming posts: